Why isn’t LinkedIn used in Japan？

The column “Why isn’t LinkedIn used in Japan” is very popular.

・The company will think that you’re trying to change jobs if you register with LinkedIn. (In Japan, many people still assume lifetime employment.)

・In Japan, building personal relationships come first and this then leads to business opportunities. This is why people prefer Facebook.

・The following reason was also given: “Japanese people do not tend to draw a clear line between public and private matters. So they can talk about both their private lives and work on Facebook.” However, I think it’s more than just that.

The problem is the people who seek to employ workers.

Human resource departments, staffing agencies and corporate hiring managers also use LinkedIn, but except for large corporations, many hiring managers in Japan are also responsible for labor management, general affairs and administration, so they avoid direct recruiting because it’s a lot of extra work.

Not only that, there’s no real reason to put much effort into using LinkedIn, because even if hiring costs could be lowered by using it, companies don’t value it very much and it wouldn’t have much impact on salaries anyway. 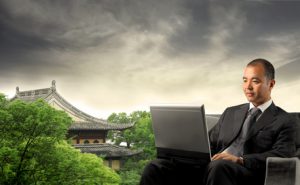