It became a hot topic that Airbnb canceled all reservations for properties that violate Japanese law. And it is said that there are still various problems in the sharing economy. However, as the Mercari listed soon, the sharing economy itself is growing also in Japan, so I would like to introduce Japan’s major sharing economy service this time. 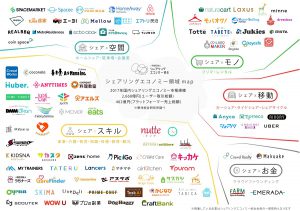 Sharing economies are generally classified into three categories: object shares, space shares, and skill share. (There are various opinions on how to classify.) The representative services of each are as follows.

Mercari: The most famous in Japan as a flea market apps.

Air Closet：A service that can wear three clothes chosen by a professional stylist at 6,800 yen per month.

Anyca ：A service that allows you to lend and borrow a car among individuals.

If you like Initial D(Japanese manga), would not you want to drive this car?

This car that became famous by the movie “Wild Speed” should be popular.

※To use Anyca you need a driver’s license issued in Japan. International licenses are not acceptable.

DogHuggy：A service that allows you to leave your dog at other dog-lovers. Many people use it instead of pet hotel.

Basically it is a service that provides individual skills and free time, but some also provide housekeeping or manual labor. The following services are famous.

There is also a service called Traveloco specializing in matching with Japanese guides living abroad.

It may be the nationality of the country to decide which sharing economy will be popular there, rather than the regulation problem.